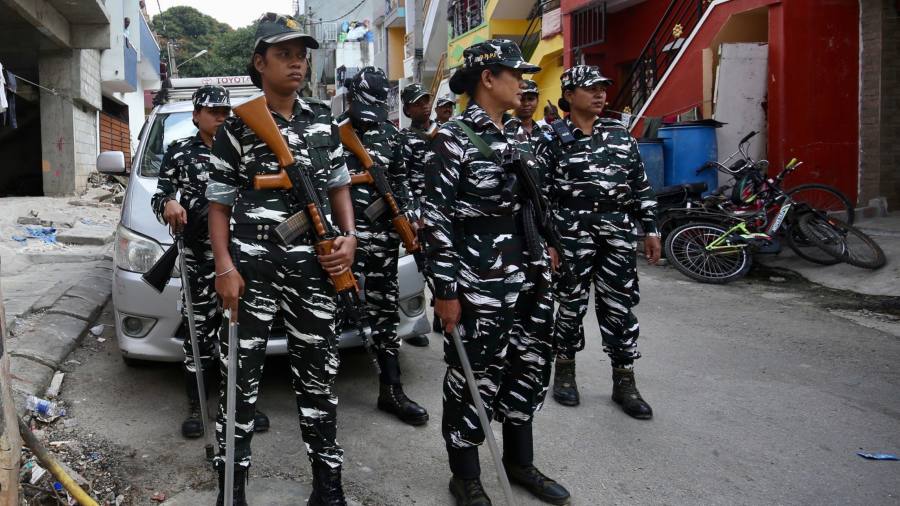 India’s prime minister Narendra Modi has outlawed a leading Muslim group and its affiliates for five years, accusing it of links to terrorist organisations, in a move that is likely to foment the country’s deepening communal tensions.

The banning of the Popular Front of India on Wednesday followed the arrests in recent days of more than 200 of its members and searches of top leaders’ houses and offices.

India’s Ministry of Home Affairs said the PFI was involved in “serious offences, including terrorism and its financing, targeted gruesome killings, disregarding the constitutional set up of the country [and] disturbing public order”.

The ban extended to eight other groups that work on behalf of the Muslim minority population, which makes up about 200mn of India’s almost 1.4bn people. Those organisations included the Rehab India Foundation, the Campus Front of India, the All India Imams Council, the National Confederation of Human Rights Organisation, and the National Women’s Front.

India’s government said that outlawing the PFI and its affiliates was “necessary to curb the nefarious activities of the organisation”.

Islam is the second-largest religion in Hindu-majority India. The PFI was founded in 2006 to act as a counterweight to Hindu nationalist groups, which have been ascendant on the national political stage since Modi’s election in 2014.

The banned Muslim organisation is mostly active in southern India, but has a wide network across several states, including in the country’s north and the capital, New Delhi.

One terrorism expert said that while the PFI “preaches hatred” and some members had engaged in violence, he was waiting to see what evidence the state would provide to justify the arrests and blanket ban.

“We don’t have anything in our databases which suggests this is a major terrorist organisation,” said Ajai Sahni, executive director of the Institute for Conflict Management and the South Asia Terrorist Portal in New Delhi. “It has been engaged in radical activities, even violent activities, but this is what you call within our context communal killing.”

Sahni added: “Terrorism would require randomness of attack, where the target is a wider population or the state, not an individual.”

Modi, who was re-elected in 2019, and his ruling Bharatiya Janata party have been accused of promoting a Hindu nationalist identity and tacitly empowering hardline groups at the expense of the Muslim community. That year, the government stripped Jammu and Kashmir, the only Muslim-majority region, of constitutionally protected autonomy.

Some PFI members have carried out killings and violent crimes, including chopping off the hand of a professor in the southern state of Kerala in 2010 after he was accused of blasphemy.

“I have no love lost for PFI,” said Ghazala Wahab, author of Born a Muslim: Some Truths about Islam in India. “My only problem is that whenever there is a Muslim organisation, it is not regarded as a law and order issue — everything is branded as terrorism.”

India’s government accused the PFI of links to banned Islamist groups, including the outlawed Students Islamic Movement of India, the Jamaat-ul-Mujahideen of Bangladesh, and Isis.

Indian authorities banned the group under the Unlawful Activities (Prevention) Act, a 1967 law that gives the government special powers to act in the case of threats to the integrity and sovereignty of the state.