Populism vs privatisation: what’s next for Brazil’s Petrobras 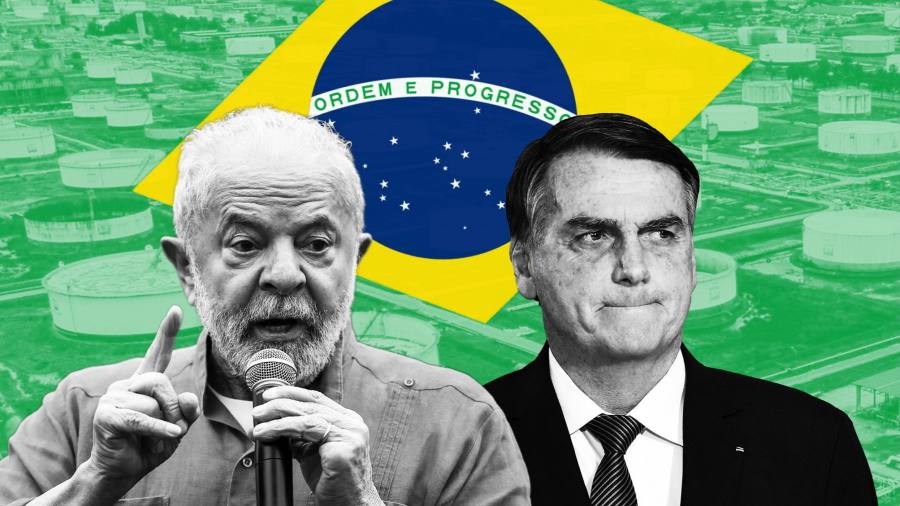 The last time the left was in power in Brazil, the country’s most important company was looted in a multibillion-dollar corruption scam and almost buried under a mountain of debt.

After emerging from the scandal and financial turmoil of the previous decade, $76bn oil and gas giant Petróleo Brasileiro is leaner, more profitable — and a cash machine for its owners.

As Latin America’s largest nation prepares to choose a new president, very different visions are on offer for the state-controlled group better known as Petrobras.

His main challenger and the frontrunner, leftist ex-president Luiz Inácio Lula da Silva, intends to reassert greater government influence over what was at one time considered the crown jewel of the Brazilian economy.

Lula’s manifesto calls for Petrobras to once again be an “integrated energy company”, present in fertilisers, renewables and biofuels — areas at one point it largely decided to exit in order to focus on its core activity of pumping deepwater crude.

There would be a bigger role for Petrobras in the clean energy transition. The 76-year-old also wants it to work towards national self-sufficiency in refined derivatives, such as petrol and diesel, and stop charging international prices for fuel sold domestically.

“We would like to use oil so that Brazil can be an exporter of petroleum products and not an exporter of crude oil,” Lula told the Financial Times in a July interview.

“Petrobras has to be profitable, it has to earn, it has to distribute dividends to the shareholders. But it cannot be the madness that it is today. What is happening is a total debacle, it is a crime against the Brazilian people.”

The veteran politician’s resource populism taps into public discontent in Brazil over living costs, a sentiment inflamed by bumper profits at Petrobras. Like other oil majors, it benefited from a rise in crude benchmarks triggered by Russia’s invasion of Ukraine.

As well as beating predictions with a 27 per cent increase in net income to R$54.3bn ($10.1bn) during the second quarter of 2022, Petrobras was the world’s biggest corporate dividend payer in the period, according to research by fund manager Janus Henderson.

Private shareholders, including western financial institutions such as Baillie Gifford and Fidelity, together hold almost two-thirds of the company’s equity, but with more than half of voting rights the Brazilian state wields control.

Despite a recent tumble, its São Paulo-listed preference shares are up 50 per cent so far in 2022, outperforming the local stock index.

However, Lula’s proposals have unnerved some investors. The fear is a return to the days of political interference under Lula’s Workers’ party, or PT, which ruled Brazil for 13 years until 2016.

“They used Petrobras almost as an arm of the government,” said a large shareholder, who asked not to be named. “If they do what they’re saying they will with Petrobras, it will be very bad. Without a doubt, it is better as a focused company.”

A worry is that a renewed diversification push requiring extra investments could hit profit margins and cash generation.

Yet others hope that Lula, who governed Brazil for two terms between 2003 to 2010, will prove pragmatic on economic matters — and avoid radical interventions in the company.

“The challenge we have is understanding what are actual proposals and what is campaign rhetoric,” said another shareholder.

During Lula’s time in office, Petrobras found vast offshore oil and gas deposits known as “pre-salt” reserves that ranked among the world’s largest discoveries in decades.

But on the PT’s watch, the company was at the centre of a labyrinthine graft scheme revealed by an investigation codenamed Lava Jato, or Operation Car Wash.

Senior company executives and politicians were found to have received kickbacks in exchange for awarding inflated contracts to construction firms. Petrobras suffered losses of R$18bn ($3.4bn) as a result of the cartel, Brazil’s federal audit court estimated in 2020.

The US Department of Justice described it as “the largest foreign bribery case in history”. Dozens of businessmen and politicians were jailed, including Lula, though he maintained his innocence and the two convictions were later annulled.

A number of other Car Wash cases against the former president were either dropped, expired or suspended.

Mismanagement and meddling also took a heavy toll. Under Lula’s chosen successor, Dilma Rousseff, Petrobras was forced to keep fuel prices artificially low in a bid to tame inflation. A former chief executive estimated this cost the group some $40bn.

Elsewhere, refinery projects went over budget and unfinished. Borrowings exceeded $130bn by 2015, making Petrobras the most indebted company in the sector.

Since these crises, the Rio de Janeiro-headquartered group has tightened compliance and reduced its gross debt to below $54bn. It has looked to offload assets such as mature fields, petrol stations and refineries, concentrating instead on exploration and production in the Atlantic Ocean.

“The company has gone through a trajectory of recovery. Not only financially, but also in governance and credibility,” said chief financial officer Rodrigo Araujo Alves. “The strategy is solid”.

The Bolsonaro era has not been without tumult. The rightwing populist has regularly attacked Petrobras over fuel costs and fired three chief executives in little over a year.

But in a measure of the robustness of its overhauled internal procedures, the company has maintained a policy of moving refinery gate prices in line with dollar-based rates on external markets.

Lula has promised to end the practice, which critics say passes on volatility to consumers. However, there are warnings this could harm not only the company but also risk shortages.

Brazil produces enough crude for its own needs, but lacking adequate refining capacity to meet domestic demand relies on shipments of derivative products from abroad.

“Oil is a global market — there is no room for artificial prices [or] price controls,” said Alves. With at least one-fifth of diesel consumed in Brazil from overseas, “the importers need to be able to buy at the international price and sell in Brazil”.

Lula’s advisers have sought to soothe market concerns. A way to implement his pledge to “Brazilianise fuel prices” is through reference values formulated by a government agency, with vendors free to follow or ignore them, according to PT senator Jean Paul Prates.

While Lula has railed against the sale of public-owned enterprises, Prates played down the possibility of renationalising assets divested by Petrobras.

“What we’re going to try to do is recover a vision of Petrobras for the future,” he said. “There is no reason to fear the return of president Lula and the PT, because the lessons have been learned.”

One issue for investors is that fertilisers, refining and biofuels have lower returns than exploration and production, according to Marcelo de Assis at consultancy Wood Mackenzie.

Petrobras says oil extracted from the pre-salt zones has lower carbon emissions per barrel than the world average. But given exploratory drilling there has disappointed in recent years, de Assis echoed criticisms that the company is not doing enough to prepare for a changing energy landscape.

“Brazil has an opportunity to start the [energy] transition now, but we really need a change in Petrobras today. What they’re investing in renewables and carbon capture is very small compared to the majors.”

Privatisation is viewed as the best possible outcome by lots of analysts and investors.

By removing the threat of government intrusion, they believe it would untether the company’s share price, which is undervalued to many peers. “It would take the company to [a] completely different level,” said one of the shareholders.

Yet the process is at an early stage and even if Bolsonaro wins re-election it is likely to be an unpopular move, face legal and political hurdles and take years, said experts.

If the polls are correct and Lula triumphs, investors can find some comfort in legal reforms and new corporate governance norms at Petrobras approved in the wake of Car Wash.

These are designed to prevent governments using state-controlled enterprises for political gain and oblige ministers to reimburse any costs incurred as a result of enforced subsidies.

But as controlling shareholder, the state can still effectively shape strategy by replacing the board and top job. “Petrobras is still protected at this point, but again a lot can be changed,” said de Assis.