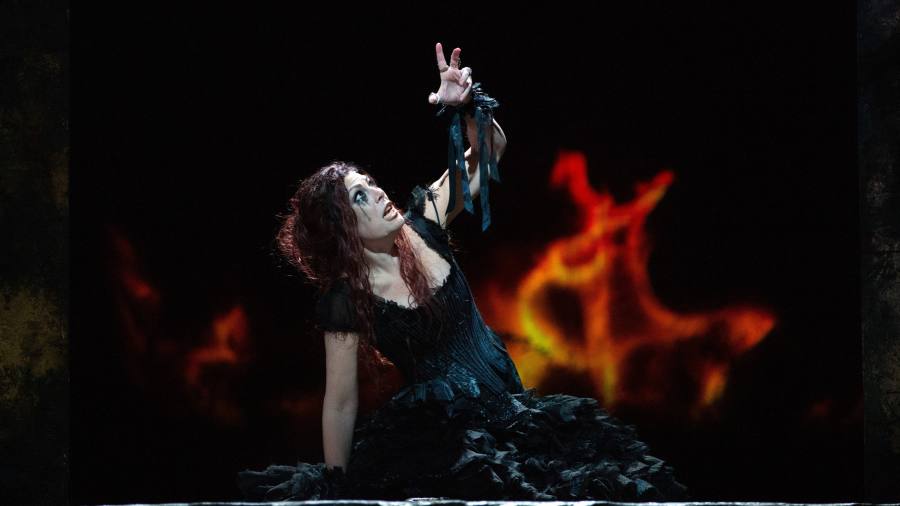 Maria Callas never sang in Medea at the Metropolitan Opera, but — because of her interpretation in performances elsewhere, as well as famous recordings — her spirit is the omnipresent force behind the company’s first ever production of Cherubini’s 1797 opera, which opens the company’s new season. Its title role of mythology’s quintessential woman scorned is irresistible to dramatic sopranos. If ever there was a role that enables them to flaunt their stuff unabashedly, even as it relegates artistic cohesion to second place, this is it.

Like other French operas with spoken dialogue, Cherubini’s Médée gained popularity in Italian-language performances with recitatives replacing the dialogue. The wrinkle here is that its recitatives — dating from the 1850s — were composed in a sumptuous Wagnerian style at odds with Cherubini’s classical approach. In particular, the forceful declamation they demand of the singers often undermines Cherubini’s more measured approach towards building drama. He saves his most diabolical vocal writing for Medea until the finale, as she vacillates over murdering her own children fathered by the unfaithful Jason. But its impact is blunted by the vehement exchanges that precede it.

In Europe, the trend is to perform Médée in its original French form. But Callas liked Medea the Italian way, complete with 19th-century additions, and, prodded no doubt by its current exponent, Sondra Radvanovsky, the Met acquiesced. Fortunately, Radvanovsky delivers. Dressed mysteriously in black and looking forbidding yet striking (Doey Lüthi designed the costumes), Radvanovsky began with a deceptively lovely account of Medea’s sympathetic initial aria and went on to show her mastery of vocal declamation, making words tell through vivid attacks and colouring. One missed the gleaming tonal flashes of Callas’s recordings, but Radvanovsky sang generously and never tired; indeed, she seemed to bring new reserves of sound to the finale.

Overall, though, one cannot escape the sense of witnessing a historical relic, a feeling reinforced by David McVicar’s opulent but inert production characterised by primitive, stone-like sets (designed by McVicar) with metallic hues possibly inspired by the fabled Golden Fleece, which Medea helped Jason steal. McVicar makes effective use — particularly for the wedding festivities of Jason and his ill-fated bride, Glauce — of views of the action taken from above and projected on a screen at the rear of the stage.

Best in the supporting cast is Ekaterina Gubanova as Medea’s confidante Neris, who expresses her loyalty but also represents Medea’s conscience in her doleful aria with bassoon obbligato at the heart of the opera. Michele Pertusi is duly authoritative as Glauce’s father, the Corinthian king Creon, and Matthew Polenzani portrays the ineffectual Jason. The conductor Carlo Rizzi would doubtless like to remind people that Leonard Bernstein also conducted essentially the same Italian version of Medea (with Callas), but Rizzi’s workaday contribution here will do little to enhance his reputation.