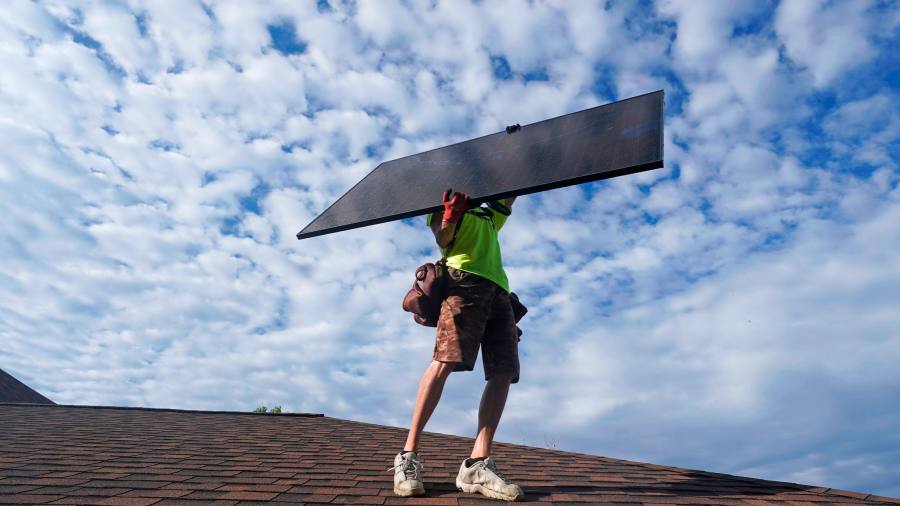 This article is an on-site version of our Energy Source newsletter. Sign up here to get the newsletter sent straight to your inbox every Tuesday and Thursday

Another Tuesday, another Energy Source.

Oil continued its slide yesterday with both major benchmarks shedding more than $2 apiece to plumb fresh nine-month lows. Brent settled below $85 a barrel for the first time since mid-January. And in the US, WTI was within spitting distance of its lowest level of the year.

A resurgent dollar has squeezed crude prices in recent days. But the drop also reflects an increasingly bleak economic outlook as central banks increase rates across the globe.

In the US this week, we are keeping a close eye on the permitting reform battle (see last Thursday’s newsletter for a rundown) playing out in Congress. Voting is expected to start today on Senator Joe Manchin’s divisive plans to speed up green and not-so-green energy projects. Clean energy bosses have warned achieving the president’s climate targets depends on its success. But Manchin has struggled to rally political support for the bill from Republicans and Democrats alike.

As we discuss today, though, getting turbines erected, panels installed and batteries plugged-in at pace is not just an American problem.

In an interview with Derek in Pittsburgh, Francesco La Camera, head of the International Renewable Energy Agency, warned the speed and scale of the global clean energy rollout are far short of what’s needed to hit the Paris agreement’s targets. That is the focus of today’s newsletter.

And with winter now looming, the reality of rampant energy bills will soon be hitting home. We have written extensively on the costs facing European consumers. But Americans are also in for a rough ride, as Amanda shows in Data Drill.

The head of the International Renewable Energy Agency has a blunt message: the world is well behind on the clean energy deployment needed to prevent the worst ravages of climate change.

“If we don’t change dramatically the way we produce and consume energy, 1.5C is close to vanishing,” Francesco La Camera, director-general of Irena, told me in an interview in Pittsburgh last week. He was referring to the Paris agreement’s goal of restricting a global temperature increase. “If we don’t change attitudes very soon, also 2C is at risk — and we will pay the consequences.”

Current global spending on clean energy is about $1tn dollars a year, well shy of the $5.7tn the world needs to green its economy sufficiently to avert the worst climate impacts, La Camera said.

And the energy shortages triggered by Russia’s invasion of Ukraine have not helped, given the revival of coal generation and rush to secure alternative fossil fuel supplies that have ensued.

“The last year is not playing in favour because of the [energy|] crisis. We will have an increase in emissions over the next two years,” La Camera said.

Party in the USA

La Camera’s comments contrasted with the sense of euphoria prevalent at the inaugural Global Clean Energy Action Forum last week, where the Irena boss was among clean energy execs, climate gurus, and smiling politicians talking about the huge new market opportunity unfolding around the world.

The event came just weeks after the US passed huge clean energy subsidies in the Inflation Reduction Act, or IRA — “a completely misnamed piece of legislation”, said John Kerry, the Biden administration’s climate envoy and another GCEAF delegate, referring to the acronym’s unfortunate overlap with the name of the Irish republican paramilitary group. “We’re running around saying we support the IRA — it’s tricky.”

Jennifer Granholm, US energy secretary, was the star of the show — her voice even greeting the public travelling on Pittsburgh airport’s shuttle train last week.

“It’s very big and it’s all about pushing, pushing, pushing, to deploy, deploy, deploy clean energy solutions,” Granholm said at an opening ceremony, straining to be heard over the clinking of wine glasses and chomping of high-quality chorizo at a soirée in the Heinz History Center. “And guess what, we’ve got energy legislation!” she added, to applause.

Kerry was no less effusive. The legislation, coupled with Congress’s adoption of the Kigali Amendment to curb planet-warming hydrofluorocarbon pollution, would allow America to slash its emissions in line with its commitments. The country would account for just 5 per cent of global carbon pollution later this century, compared with about 30 per cent now.

Rich western countries may at last be doing their bit, at least in terms of policy, “but the others are not there”.

The coming UN climate conference in Sharm el-Sheikh is likely to revive some disagreements between the developed world — rich after decades of fossil fuel use and responsible for the bulk of global emissions — and the global south, where some areas still lack adequate electricity supply.

The European Investment Bank reinforced the impression again last week, reiterating that it would not fund natural gas projects in Africa — despite European efforts to secure fossil fuel supplies from Nigeria, Mozambique, and others.

La Camera said he hoped the COP27 in Egypt could bring a “change of mood” in discussions between developing and developed countries. Developed nations should offer “something concrete” to show support and build up supply chains in Africa to support its own renewable energy sector and promote industrial growth without emissions, he said.

Fossil fuels had been present across Africa for 70 years and had failed to secure adequate electricity provision, La Camera said. “The fact is that today if you want to produce electricity, the most convenient way to do this is to go for renewables.” -Derek Brower

Americans will shell out a lot more to stay warm this winter. The National Energy Assistance Directors Association estimates households will spend on average $1,202 to heat their homes this season, up 17 per cent from last year.

The 60.8mn households that heat their homes with natural gas, the most common heating fuel, will face the largest price rise — roughly 34 per cent, according to NEADA.

NEADA’s forecast shows that even the natural gas-rich US is not immune from the costly winter that’s been well-documented in Europe. Gas prices in the UK and Germany have more than tripled since last year, prompting governments to intervene.

Spot prices for Henry Hub, the US gas benchmark, are up 55 per cent from last year because of higher demand and low inventories, according to the US Energy Information Administration. The agency estimates they will rise by another 8 per cent by the end of the year.

American utilities have started to warn customers about higher winter bills. New York City’s Con Edison has predicted a rise of as much as a third. National Grid, which serves New York and neighbouring Massachusetts said its customers’ bills could rise by two-thirds.

While US prices still pale in comparison to Europe, the higher winter bills come as households struggle to make ends meet amid rampant inflation. Nearly one in four US households reported being unable to pay their energy bill at least once in the past year in August’s Census Household Pulse Survey. (Amanda Chu)

Energy Source is a twice-weekly energy newsletter from the Financial Times. It is written and edited by Derek Brower, Myles McCormick, Justin Jacobs, Amanda Chu and Emily Goldberg.

The Climate Graphic: Explained — Understanding the most important climate data of the week. Sign up here