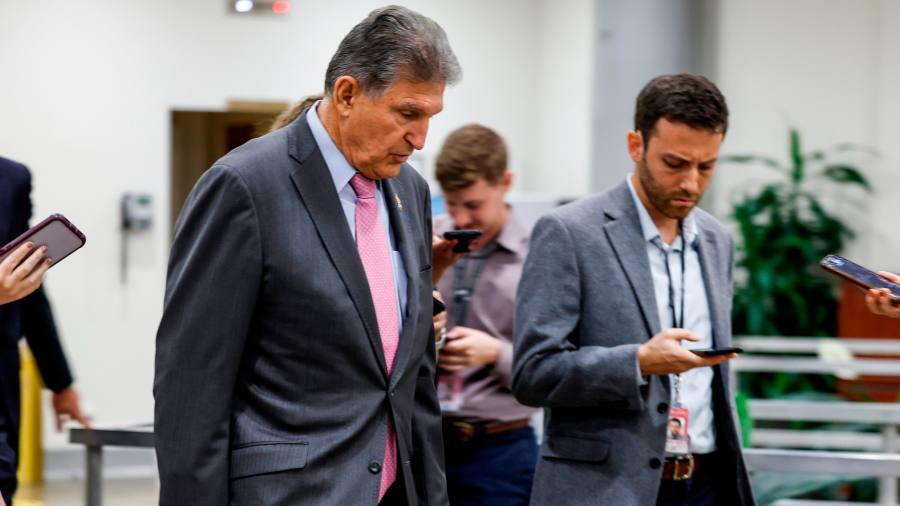 A controversial plan to overhaul America’s clunky energy permitting system was gutted from a crucial spending bill on Tuesday — dealing a blow to pipeline and power grid developers, but lessening the chances of a government shutdown.

West Virginia senator Joe Manchin said he was pulling his divisive proposals to speed up permitting of projects from a bill to extend funding for the federal government after strong opposition to the measures from both Republicans and Democrats.

The move comes days before Congress is due to vote on the wider spending package, known as a continuing resolution, which must pass in order to avert a government shutdown.

“A failed vote on something as critical as comprehensive permitting reform only serves to embolden leaders like [Vladimir] Putin who wish to see America fail,” said Manchin.

“For that reason and my firmly held belief that we should never come to the brink of a government shutdown over politics, I have asked majority leader [Chuck] Schumer to remove the permitting language from the continuing resolution we will vote on this evening.”

Manchin struck a deal with Democratic party leadership during the summer to attach his permitting reforms to the must-pass spending bill in exchange for supporting Joe Biden’s landmark climate and social spending bill, the Inflation Reduction Act, on which he had been the lone holdout vote.

Biden described the bill as “the most aggressive action ever” to confront climate change — and said its billions of dollars in tax credits would spur a clean energy buildout that would position the country to achieve its commitments under the Paris agreement to cut emissions in half by 2030 versus 2005 levels.

Renewables bosses had warned that without permitting reform, the legislation would not achieve its full potential, however, putting at risk the country’s ability to hit its climate targets.

Manchin’s permitting proposals would have capped the time taken for environmental reviews of major projects at two years, limited the timeframe for legal challenges and created a list of 25 projects of “strategic national importance” for expedited approval.

But he failed to garner sufficient support on either side of the aisle for the measure. Republicans — who have long supported permitting reform — were still smarting over his support for Biden’s inflation legislation. Progressive Democrats, meanwhile, were opposed to supporting proposals that would help accelerate the development of fossil fuel projects.

In particular they objected to language that would have allowed for the completion of the controversial Mountain Valley Pipeline, meant to shuttle gas between Virginia and West Virginia, which has faced intense opposition from environmentalists.

Still, Manchin’s measures brought together fossil fuel and clean energy executives in an unusual alliance, with both groups broadly supporting the measures, which would have smoothed the development of pipelines needed to ship oil and gas as well as the transmission lines needed to carry electricity from wind and solar projects.

They lamented the politicisation of what they said should be a bipartisan priority, accelerating the development of projects that both parties supported.

“It seems to me this should not be a political issue,” Pedro Azagra, chief executive of utility owner and clean energy developer Avangrid, told the FT before the proposals were withdrawn. “Republicans are very keen on certain projects being done faster and we have the Democrats now [moving] in the same direction . . . This should be one example of people understanding each other.”

Manchin vowed to fight on to achieve reform, however. “I stand ready to work with my colleagues to move forward on this critical legislation to meet the challenges of delivering affordable reliable energy Americans desperately need,” he said.